When FOG enters the waste stream it cools and congeals within the piping systems creating flow problems and odours due to the property of being poorly soluble in water.

FOG’s will build up in pump stations overtime, often resulting in the need for costly sucker truck clean outs. Without proper degradation of the fats, they will also cause problems downstream at the treatment plant.

Degradation of FOG begins with the breakdown of the complex molecule by extracellular enzymes produced by microorganisms. 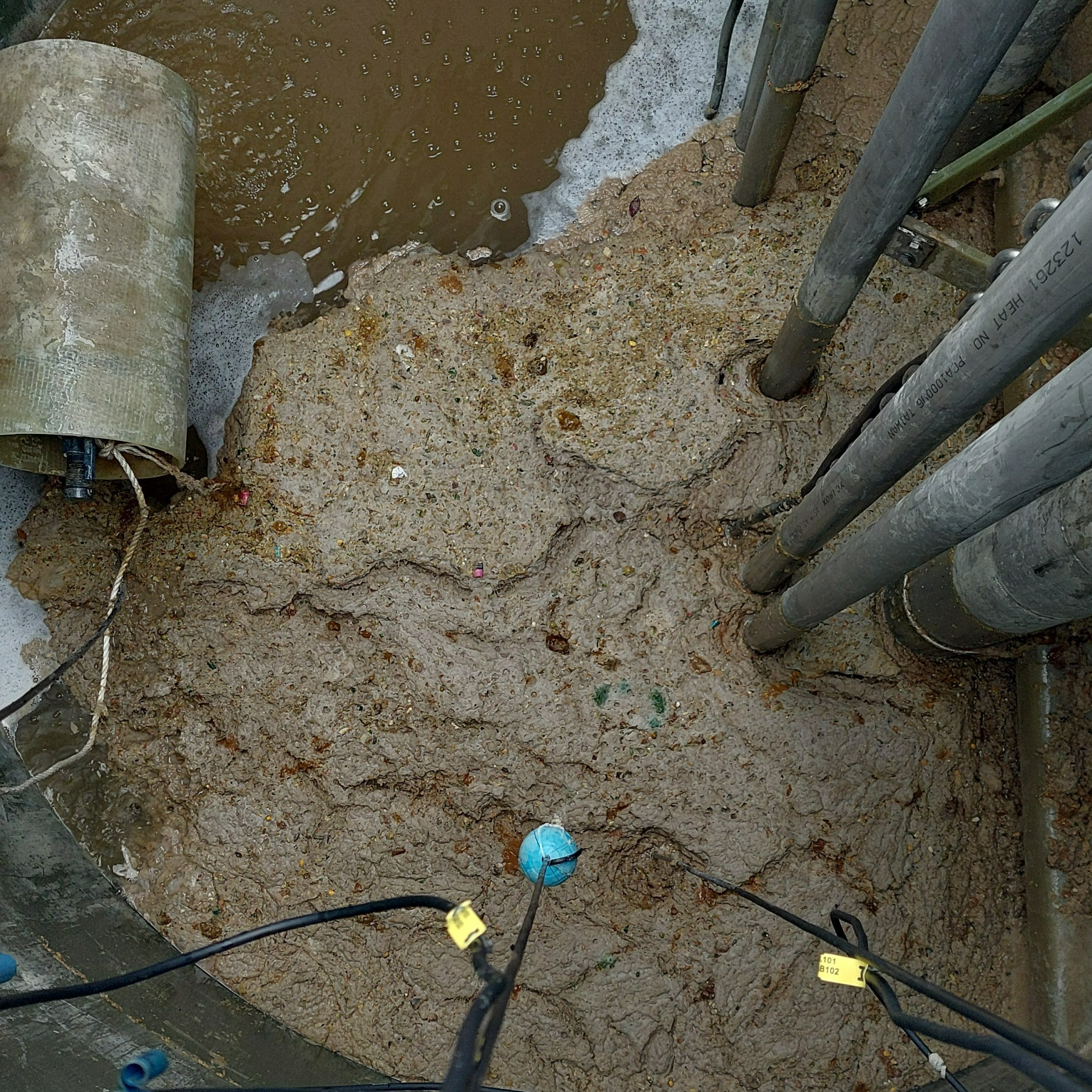 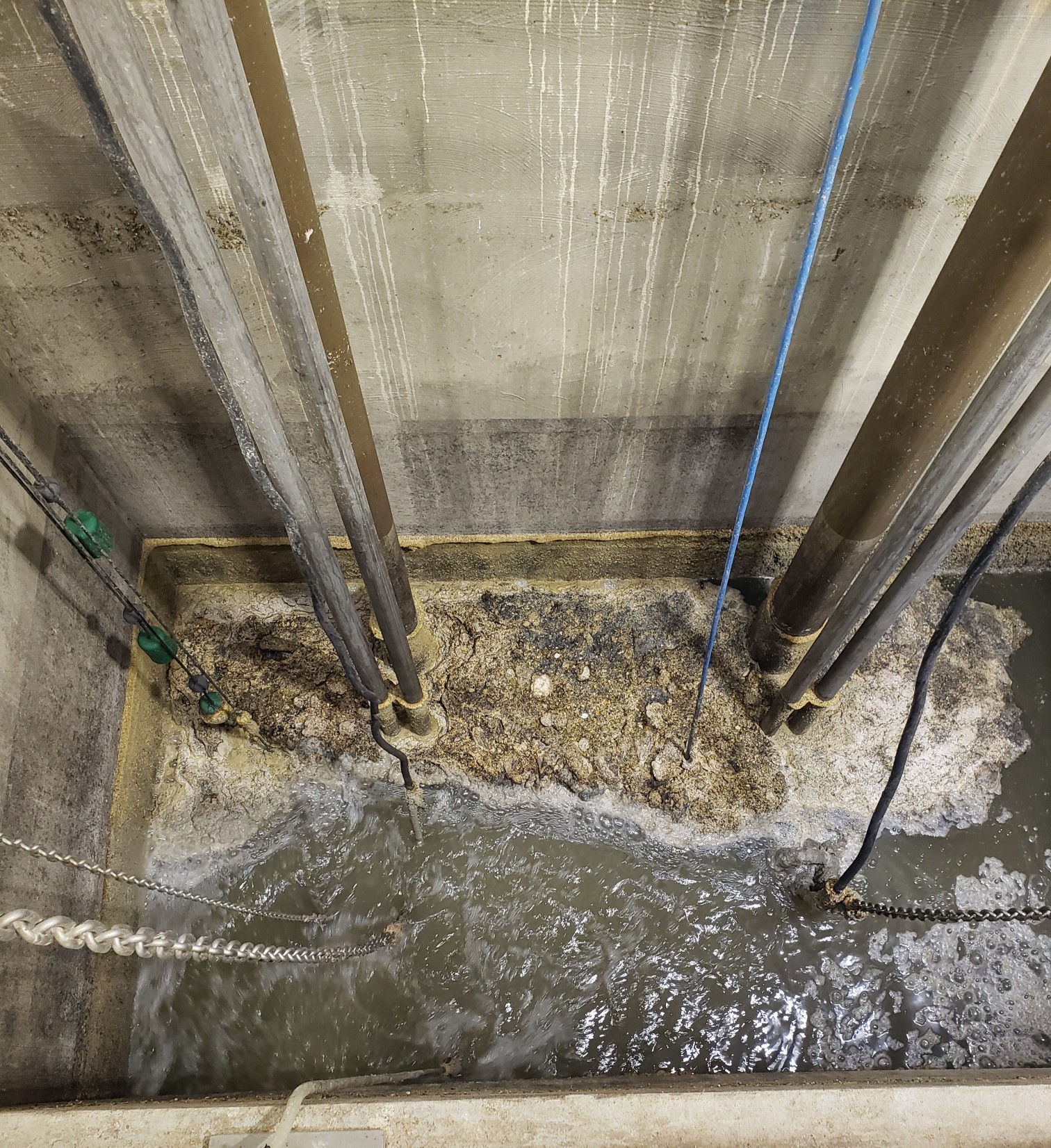 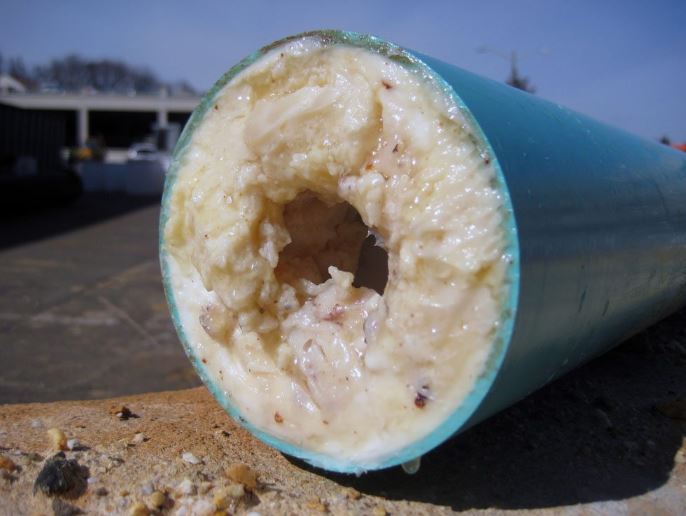 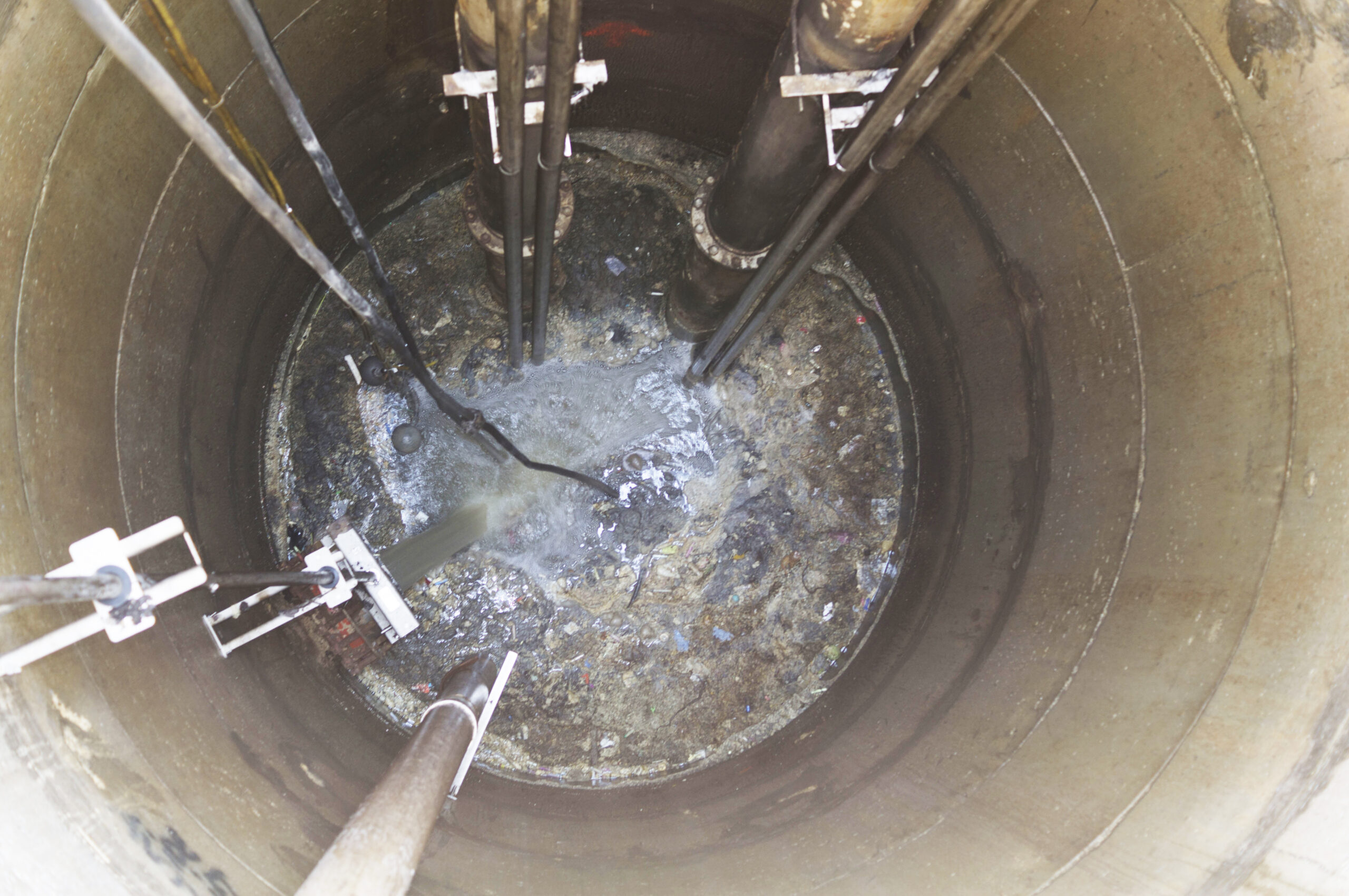 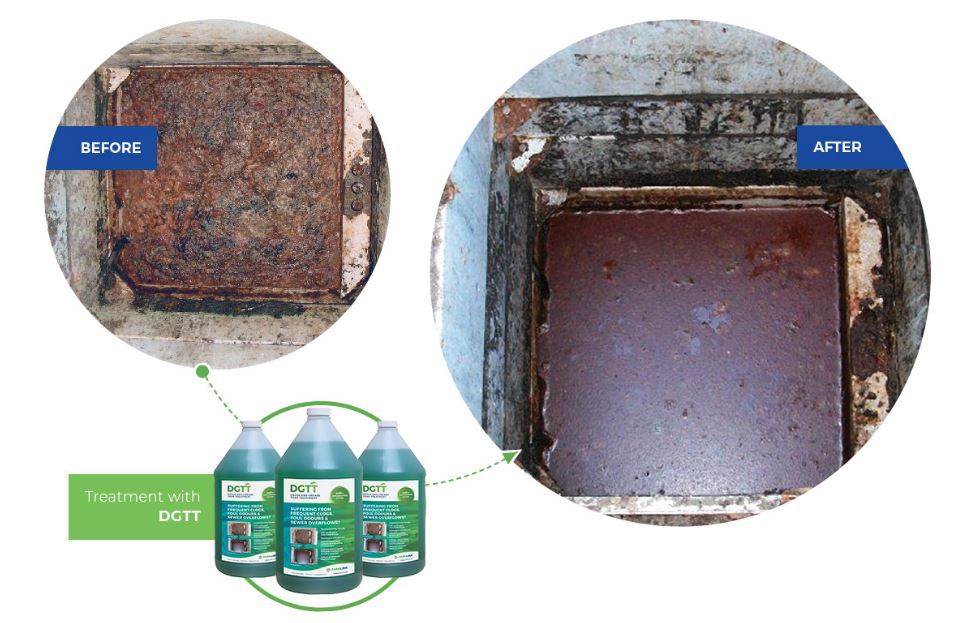 SHIELD-Degrease® is a revolutionary new grease-digesting bacteria complex for wastewater networks and pump stations. It softens and removes grease, degrades grease on the walls, and lowers hydrogen sulfide.

SHIELD-Degrease® combines hydrophilic bacterial cultures with a fast acting biocatalyst that quickly breaks up and digests grease in pump stations where it has hardened on the walls.

SHIELD-Degrease® can be used successfully in conjunction with SHIELD-Maintainer™ in wastewater networks but is also an excellent solution on its own for grease traps and drains. 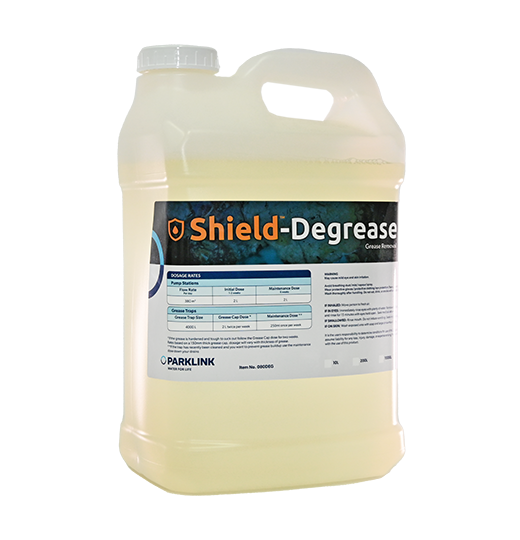 Degrade It, Don’t Push It!

Most grease removal products are citric-based oil-separators that just push along the grease or don’t work at all. If pushed, the harmful materials go right to the wastewater treatment plant which can cause major upsets and foaming. SHIELD-Degrease® will degrade and digest heavy buildup of fats, oils and grease stuck on the walls of pump stations and pipelines, leaving the wastewater free of incoming grease.

Operators are fighting against the issues caused by “flushable” wipes all over the country. While marketed as biodegradable, the majority of these wipes are made from polyester, a material that generally takes 20 to 40 years to break down. Parklink has seen firsthand the clogs and compaction these wipes cause, binding together with grease and other matter in sewer lines and lift stations. The wipes really begin to cause problems when combined with grease to form mats and float, clogging lift stations. SHIELD-Degrease® dramatically hydrolyzes grease to rob flushable wipes of the glue they need to form large clumps and keep operations running smoothly.

SHIELD-Maintainer® is a unique bacterial ‘block’ for easy pump station grease control.  This unique formula binds together bacteria and biocatalysts with a slow release oxygen-rich biostimulant base.

SHIELD-Maintainer® comes with 1m of rope. Use a nylon rope for the remaining length and attach it to the end of the rope provided to reach the depth of your pump station. 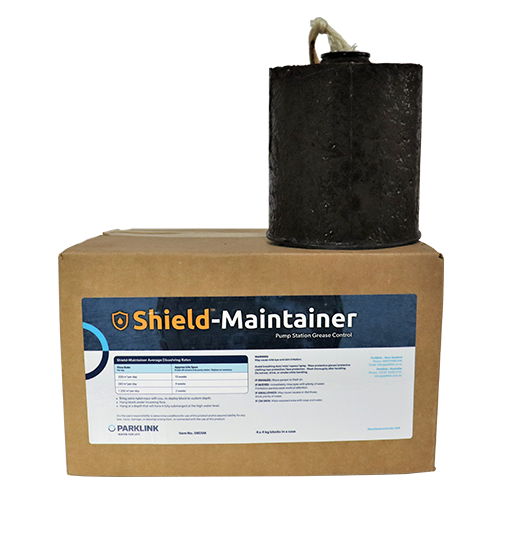 Better Together: SHIELD-Maintainer® and SHIELD-Degrease® liquid’s are better at tackling the toughest grease when used together.

SHIELD-Degrease® aggressive liquid biology clings to and dissolves hardened and old accumulations of grease. After existing accumulations have been degraded, SHIELD-Maintainer® is placed in the pump station to provide continuous maintenance for grease degradation.

SELECT-Grease® is a ‘grease degrader’ that incorporates three types of fat-degrading biocatalysts to provide dramatic hydrolysis of fat, oil, and grease (FOG). These catalysts speed the breakdown of complex fat molecules into simple short chain fatty acids. This is not a bacterial product. SELECT-Grease® will convert the FOG into more easily-assimilated material for the bacteria.

SELECT-Grease® can degrade a range of fatty acids such as oleic, steric, palmitic as well as fish oils, triglycerides, milk, and animal fats.  SELECT-Grease® is often used in conjunction with Select-Defoam-bac® to control foaming and bulking issues. 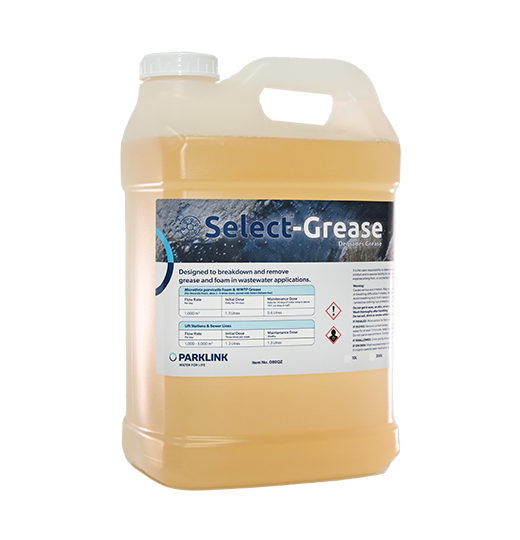 Why is it so important to control fats, oils and grease?

In the winter months, when water temperatures are colder, the naturally occurring bacteria cannot completely break down FOG and the fatty acids that build up in the wastewater plant. These fatty acids are then taken up by filaments like Microthrix Parvicella and Nocardia which allows them to float and foam. SELECT-Grease® breaks up these fatty acids and cuts off the filament’s food source.

This product is either metered or poured into the front end of the wastewater process. 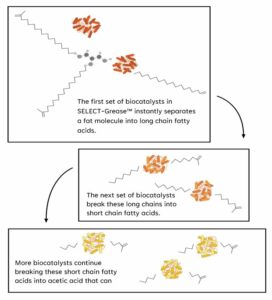 An organic chemical manufacturer contacted us about foam being generated in their treatment system. They use a series of two lagoons, with high aeration in the first lagoon to pretreat their waste stream before sending it to the municipal wastewater treatment plant. The waste stream has high concentrations of lauric and stearic acids which contribute to influent BOD 600 ppm, and COD 200 ppm. The system was not achieving complete breakdown of these fatty acids as the waste stream moved quickly through the system. The operator began using SELECT-Surfactant® to add new bacteria cultures which break-down of fatty acids. This improvement was enough to make the customer happy, but we thought that adding our SELECT-Grease®, liquid biocatalyst product, would help break down the fatty acids even more quickly. The biocatalyst accelerated the process, a huge benefit in this waste stream with a short detention time. The combination of biocatalyst and bacteria brought the systems effluent waste stream down to BOD 8.1 ppm, and COD 0.4 ppm.

The municipality upgraded their wastewater plant three years ago with fine bubble aeration. Immediately they began noticing a foot of foam on the basins and persistently higher effluent ammonia numbers. They traced the foaming issue down to a tannery in town. The tannery has an existing wastewater process of their own consisting of an equalization tank followed by aeration and a very simple DAF unit. To clean the fat, oil and grease off hides the tannery uses surfactants, substances similar to soap in their make-up. We learned the cause of the issue in the municipal plant was that surfactants were passing through the tannery system undigested, and then foaming when they hit the fine bubble diffusers at the municipal system. The tannery experimented with a number of surfactants to help stop the foaming, but to no avail.

The solution was to breakdown the surfactants at the tannery’s treatment plant. We had them increase the holding time in their EQ tank to create anoxic conditions and then they added SELECT-Grease® and SELECT-Protein® to speed the breakdown the grease and long chain fatty acids. The process was further enhanced by adding SELECT-Defoam-bac® to the aeration tank. SELECT-Defoam-bac® micronutrient blend boosts the ability of native bacteria to degrade fatty acids and grease. The biocatalysts kicked off the surfactant degradation process and native bacteria with the help of SELECT-Defoam-bac® finished the process. Immediately, the plant noticed 95% less foam and better settling. As the foam went away they also realised that the surfactants had been knocking out their nitrifiers. As the surfactants were no longer hitting them as they had before, nitrification improved and their effluent ammonia dropped. Now both the municipality and tannery are happy.

A customer in has a SBR system that was having an ongoing issue with Microthrix Parvicella. It was causing bad foaming, poor settling, and a cloudy effluent. This plant was out of compliance and needed immediate help. Their flow rate was 450 m³ / day.

They added the required dose of SELECT-Defoam-bac® and SELECT-Grease® each day for 7 days.

7 days later: Grease was cut in half and settling had improved. 21 days later: The foam was gone and the plant was in compliance with their very stringent limits.

To achieve their effluent goals, this processor has to incorporate 2 pretreatment steps before the waste stream gets to their aeration basin. First a trickling filter takes the BOD from around 4000 ppm to 1000 ppm. Next a Dissolved Air Floatation (DAF) unit removes all the grease that the trickling filter didn’t remove. Trickling filters are notorious for allowing grease to pass right through them. They system generally worked pretty well but was dependent on the DAF making up for the shortcomings of the trickling filter. However, one day a mechanical issue resulted in the DAF being taken offline, and the timeline for getting the replacement part was unknown. With only the trickling filter for pretreatment, and no other way to remove the fats, oils, and grease (FOG) they soon began foaming.

This customer started with our fatty acids analysis to determine what the concentrations of FOG were, and which fatty acids it consisted of. 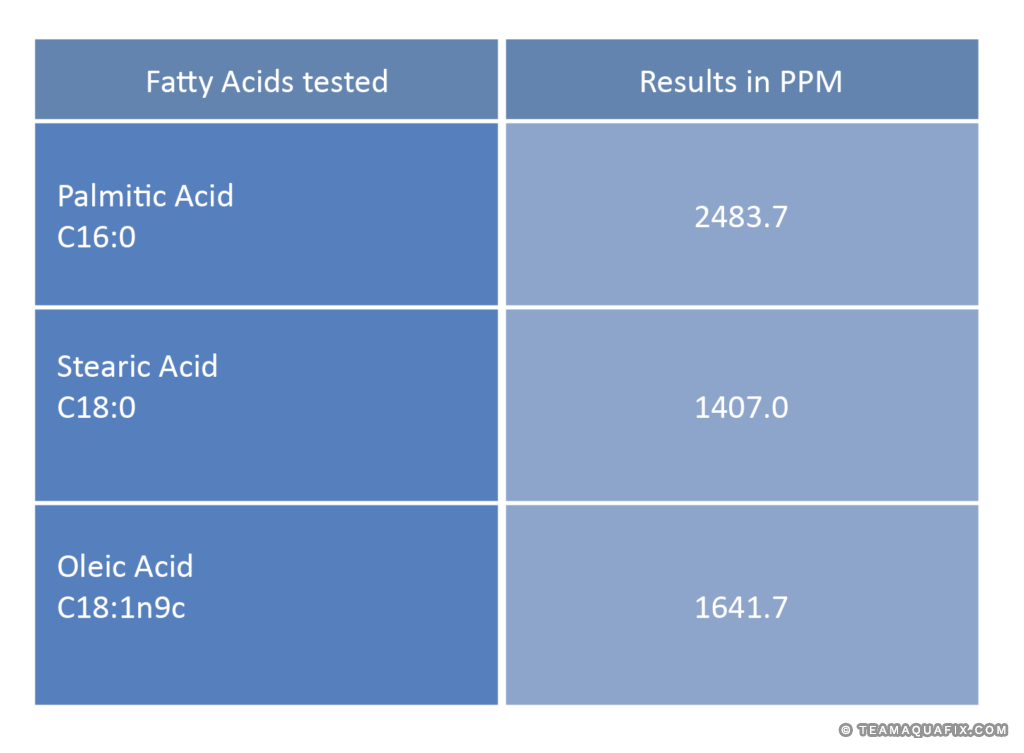 Since the loss of the DAF, total fatty acids in aeration had now jumped up to 7551.5 ppm. The fastest way to reduce the foam was to accelerate the degradation of the very high FOG in the basin. The most prevalent long chain fatty acids are also typically slow to degrade molecules in an aerobic system. The operator used SELECT-Grease™ at the prescribed dose rate each day, combined with our SELECT-Defoam-bac® blend. The biocatalysts in SELECT-Grease® act on specific structures in the FOG, which allows bacteria in the system to quickly degrade the FOG molecule. Within 30 days the foam had disappeared, despite the DAF unit still not being brought back online.