Golf course ponds and lakes suffer from many common problems that are often made more difficult when maintaining turf to the highest standards.  Nutrient over-enrichment from constant fertilisation of turf promotes the growth of algae blooms. These blooms increase the turbidity of waterbodies which can smother aquatic plants and limit invertebrate and fish habitats. The die-off of blooms may deplete oxygen and kill fish. Some blooms produce toxins, which can cause serious and occasionally fatal human diseases.

Control nutrients that cause algae in golf course ponds

In addition to the nutrients that wash in from the surface, when oxygen becomes absent at the sediment level (anaerobic), phosphorous and nitrogen release upwards to the surface waters. These surface nutrients feed and stimulate algae. The oxygenation process induced by aeration moderates nutrients from lake sediments. 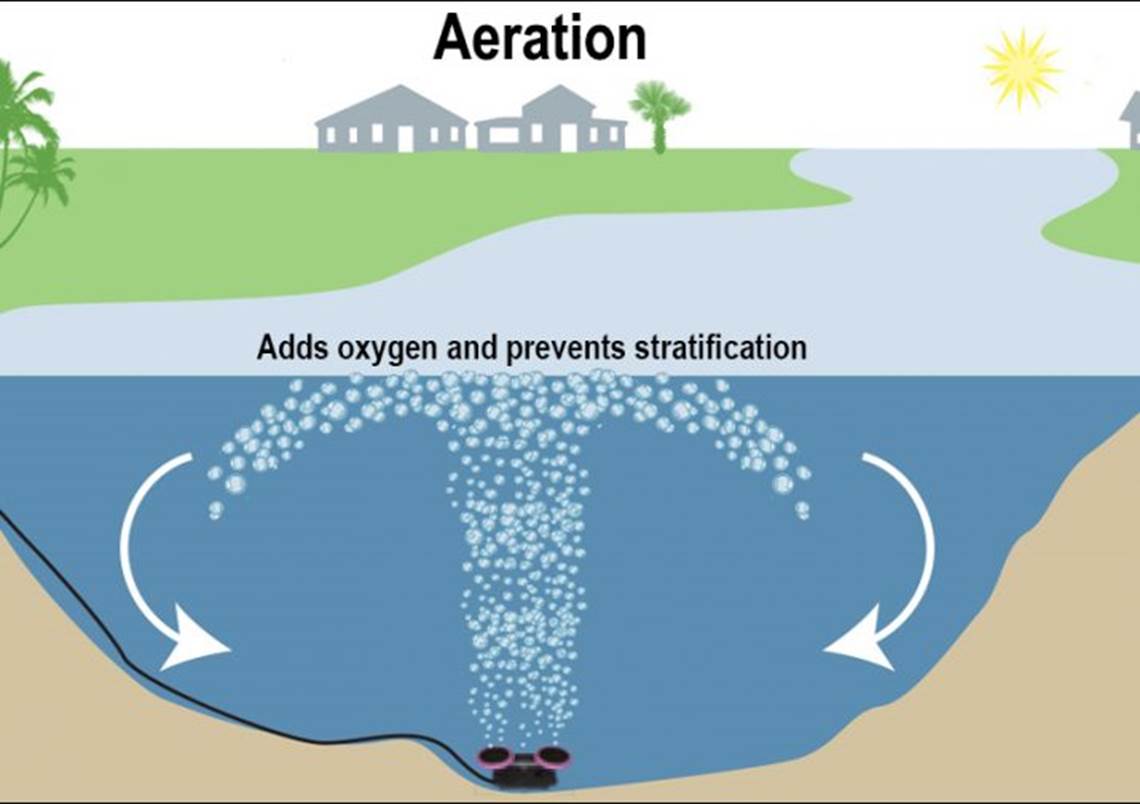 One commonly used lake management technique to reduce the occurrence of algae blooms is to pump air to the bottom of a water body, in a process called aeration.

Aeration increases water circulation throughout the water column. The circulation prevents stratification, the layering of water due to temperature and density differences from occurring.

The process of circulating water also adds oxygen. Mixing water increases the contact time of atmospheric oxygen with water, allowing for increased oxygen concentrations throughout the water column. Also, oxygenation will occur from exchanges with bubbles as they rise upwards to the surface. Maintaining aerobic (oxygenated) conditions in a lake is an important mechanism to reduce HABs. Cyanobacteria prefer low oxygen environments, while green and diatom algae prefer high oxygen environments. Aeration will alter a lake’s water chemistry to become more oxidized making it less favorable for cyanobacteria to proliferate.

While aeration may seem simple on paper, the process of designing a proper aeration system that will meet your expectations and be cost-effective is often easier said than done. Under-aerating a lake can cause more problems than solve. Undersized aeration systems can bring nutrient-laden and sometimes toxic water upwards, which can further stimulate algae growth. At the same time, over-aerating a lake is costly, competing for funding with other restoration strategies.