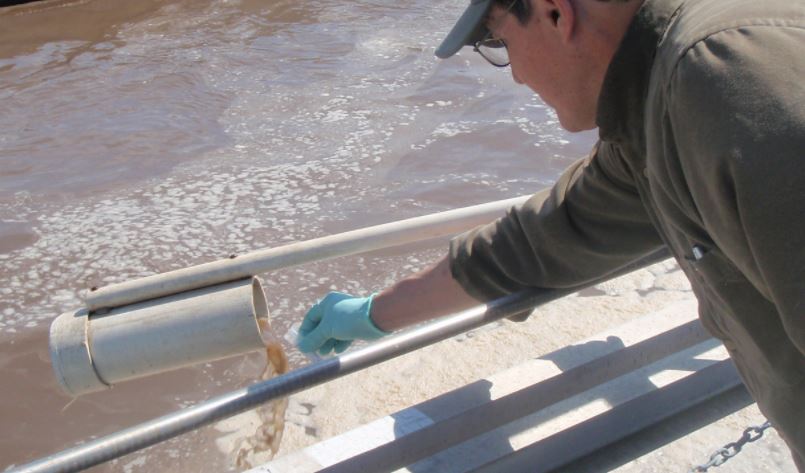 Biological Oxygen Demand (BOD) and Total Suspended Solids, or TSS, are standard testing parameters for wastewater lagoons. The ratio between the two numbers can provide valuable insight into the source of the TSS. In this article, we’ll take a look at what the ratio of total suspended solids to BOD5 in final effluent reveals about the cause of lagoon solids issues.

What is TSS?
TSS is a measurement of the amount of solid material that is escaping with the wastewater lagoon effluent, and it’s a valuable indicator of the quality of treatment. A wastewater pond’s TSS is usually mostly algae cells, but also can include filamentous and sulphur bacteria, bacterial floc, protozoa and higher life forms, plant material, silt, clay, and sludge particles. In lagoons with algae, the effluent TSS can be higher than that of the influent. BOD5 and TSS are interrelated, so if you have an effluent violation for TSS, chances are you will also have one for BOD5. As a result, it’s important to solve high TSS issues quickly to avoid being out of compliance on these two crucial parameters.

Looking at the Numbers
The EPA’s 2011 manual, Principles of Design and Operations of Wastewater Treatment Pond Systems for Operators, Engineers, and Managers, provides a handy chart to determine potential causes of high TSS effluent based on the ratio of TSS to BOD5. 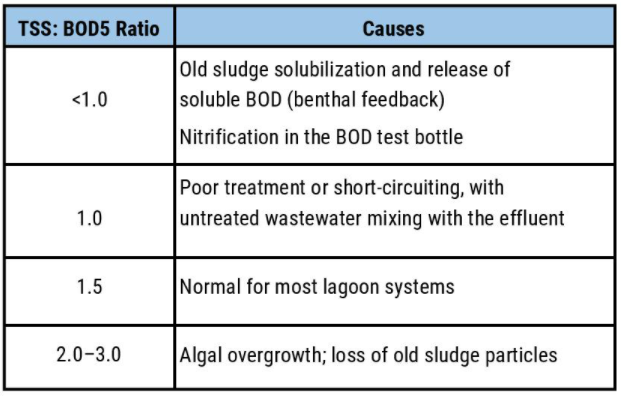 Of course, these numbers are just a guideline; the lagoon TSS to BOD5 ratio can reflect a combination of problems and will vary with season. As a diagnostic method, however, it’s a good place to start.

Lagoon TSS to BOD5 ratio of less than 1
A lagoon TSS:BOD5 ratio of less than 1 indicates that soluble BOD is being released from old sludge, a phenomenon known as benthal feedback. This often occurs during periods of seasonal turnover, when gases built up from anaerobic digestion are released, dislodging the sludge that’s settled in the benthal zone at the bottom of the lagoon.

A ratio of less than 1 can also indicate nitrification in the BOD test bottle. Any nitrifying bacteria in the sample will exert an oxygen demand, implying that there are higher levels of organic waste in the lagoon than there actually are. Especially with samples from aerated lagoons, nitrifiers can skew the results and provide an inaccurate representation of true BOD levels.

Lagoon TSS to BOD5 ratio of 1
A TSS:BOD5 ratio of 1 is essentially the same as untreated wastewater, which points to insufficient treatment or short circuiting, which is when raw influent bypasses the treatment process because of lagoon design flaws, infiltration and inflow (I&I), sludge buildup, or thermal stratification. This ratio will likely be accompanied by high

Lagoon TSS to BOD5 ratio of 1.5
A TSS:BOD5 ratio of around 1.5 demonstrates an adequate lagoon treatment performance.

Lagoon TSS to BOD5 ratio of 2.0–3.0
A TSS:BOD5 ratio between 2.0 and 3.0 indicates an algae bloom or overgrowth. It can also be caused by old sludge and nonvolatile lagoon solids being dislodged from the lagoon floor by turnover, overaeration, or influent forces.

Correcting TSS Issues
Once the type and source of TSS has been identified, steps can be taken to correct it. If one wastewater lagoon in particular is the source of the TSS problem, it might be necessary to take it off line or adjust its retention time until it recovers.

Algae is the most likely cause for excessive TSS, especially in the summer. There are a number of strategies to cope with algae.

Lagoon TSS to BOD5 ratio of 1.5
A TSS:BOD5 ratio of around 1.5 demonstrates an adequate lagoon treatment performance.

Lagoon TSS to BOD5 ratio of 2.0–3.0
A TSS:BOD5 ratio between 2.0 and 3.0 indicates an algae bloom or overgrowth. It can also be caused by old sludge and nonvolatile lagoon solids being dislodged from the lagoon floor by turnover, overaeration, or influent forces.

Ares Aeration® Prevents High Lagoon TSS
Many lagoon solids issues can be remediated by proper mixing and aeration. Turbulent mixing throughout the lagoon prevents the thermal stratification that leads to short circuiting and raw lagoon solids in the effluent. It also prevents duckweed and algae overgrowth and keeps solids in suspension and in contact with dissolved oxygen so they can be digested and not settle as sludge.

Sufficient lagoon aeration ensures that dissolved oxygen levels are high enough to keep sulphur bacteria and filamentous bacteria in check, and that organic treatment capacity is maximised to handle influent shock loads which can lead to overloading.

The Ares Lagoon Aeration System combines the mixing advantages of lagoon coarse bubble diffusers to keep solids in suspension with the efficiency of fine bubble diffusers for superior oxygenation in a high flexibility, low maintenance, portable unit. For more information, download our Ares Aeration Literature or contact us and we will be happy to help you with your lagoon aeration project.