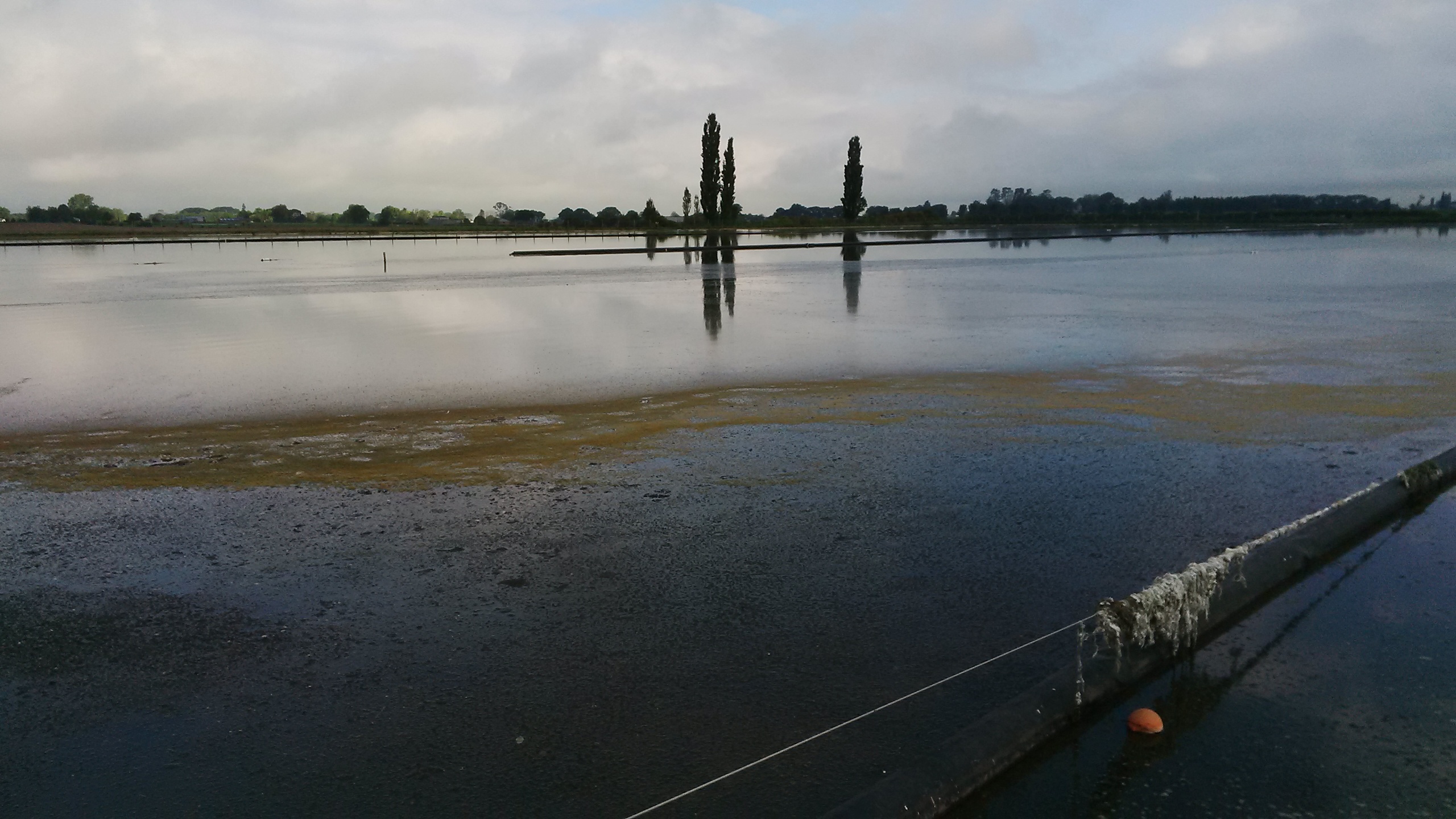 One of the benefits of lagoons for wastewater treatment is their built-in sludge storage, which reduces the need for sludge handling. However, every lagoon will eventually require dredging to remove nonvolatile solids like grit and volatile solids that are difficult to degrade and have settled to the base.
The mechanical removal of sludge is expensive and disruptive so the longer a lagoon can go between dredging’s, the better. In this article, we’ll discuss methods of lagoon sludge reduction in situ, without dredging.

What is lagoon sludge?
Sludge is defined as the biosolids that accumulate at the bottom of the lagoon. Some of it enters in the influent; some is a byproduct of lagoon operation. Components of sludge include:

Sand, silt, grit, and insoluble metals: These are not organically digestible, so they settle out. The only way to remove these components is mechanically.
Complex organics like paper and rags: Bacteria are lazy and will consume the simplest compounds first.
Dead bacteria: Most of the dead biomass will be consumed by other organisms; the more difficult to digest portions will sink to the bottom of the lagoon.
Nonbacterial biomass: Algae, duckweed, and leaf litter can settle, especially in a massive die off event (due to temperature change, a shock, or the application of an algaecide, for example).
One benefit of a lagoon-based wastewater system is the absence of daily sludge handling. The vast majority of wastewater treatment lagoons are partial-mix systems, designed to accommodate sludge buildup. Typically, the bottom 1–2 feet of the lagoon is designated as a sludge storage area, allowing for the slow anaerobic digestion of solid influent material.

Because sludge storage is built into the cell’s capacity, most lagoons can go several years, or even decades, without requiring dredging. Excessive accumulation of sludge, however can cause all sorts of problems:

Popping and floating sludge: Anaerobic digestion at the bottom of the lagoon releases odorous gases, which build up under the sludge and force it to the surface. Bubbles on the surface of the lagoon are a tell-tale sign of anaerobic digestion. In the spring and fall, as temperatures at the surface and bottom of the lagoon equalise, large amounts of sludge and gases can be released all at once—a phenomenon known as lagoon turnover.
Lagoon odours: With rising gases from anaerobic digestion (most notably H2S—a malodorous sulphur), and the floating sludge mats, unpleasant lagoon odours are released into the atmosphere in a noxious blast. If these odours are picked up by the wind, you could receive complaints from miles away.
Benthal feedback: The benthic zone is the lowest level of a body of water. Benthal feedback describes when components of settled sludge in the benthic zone of a lagoon are fed back into the water column. Benthal feedback can release BOD, TSS, ammonia, and phosphorus back into the lagoon. In fact, we’ve seen cases where the ammonia concentration going into the final unaerated cell is lower than the effluent concentration: the final cell has actually added ammonia to the water.
Insufficient treatment: Sludge accumulation reduces lagoon capacity. A 3 metre-deep lagoon with 1.2 metres of sludge is in effect a 1.8 metre-deep lagoon. Reduced lagoon capacity leads to a lower retention time, which means less treatment and higher effluent concentrations of BOD, TSS, and nutrients like ammonia and phosphorus.

How to calculate sludge volume and the volatile portion
In order to determine how much in situ lagoon sludge reduction is possible, you’ll need to know how much sludge there is and what percentage of the sludge is volatile, or organically digestible.

To determine what the sludge is made of, you’ll need a core sample, or, better yet, several core samples from across the lagoon. A core of sludge is pulled up from the bottom using a core sampler, deposited into a sample bottle, and sent to a lab. At the lab, the sludge sample will be filtered, dried into a cake, and weighed. This first measurement represents the total solids and can help an engineer calculate total dry tons of sludge to estimate mechanical dredging costs.

Next, the important number for in situ sludge removal: What portion of the sludge is volatile and can be reduced in place? To find out, the sludge cake is baked at high temperature so the organic solids—organic molecules, plant matter, dead bacteria, and paper—will gas off. What’s left are the nonvolatile solids. The difference between the total solids and what remains after baking represents the volatile solids content of your sludge, or the amount of sludge that could potentially be reduced in place. 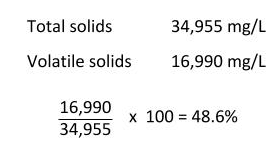 In our sample equation above, testing reveals that nearly half the sludge is volatile and could potentially be broken down in situ, which could allow you to postpone dredging for several years.

Benefits of lagoon sludge reduction in situ
While dredging is inevitable for lagoons, since there’s no way to degrade nonvolatile solids like sand, silt, and grit, there are benefits to removing as much volatile sludge as possible in place:

Lower cost, less disruptive: In situ sludge reduction is much cheaper and easier than physically removing the sludge. Dredging a multiacre lagoon can cost upwards of a million dollars and brings with it disposal challenges, since sludge can be hazardous and contain pathogens.
Immediate performance improvement: Treatment issues caused by excess sludge can be resolved much more quickly, without having to work out the bidding and logistics issues of hiring a crew to desludge.
Buys time: Sludge dredging is typically expensive and is a budget breaker for most towns, so mechanical desludging should be a last resort. Removing volatile solids in place allows time to budget for complete removal.
Methods of In Situ Lagoon Sludge Reduction

Bioaugmentation: Bioaugmentation companies like Parklink culture bacteria onsite to assist the naturally occurring bacterial community in consumption of complex organic compounds and dead bacteria. These bacteria are capable of removing a majority of the volatile portion of the sludge. Bioaugmentation works best in the summer, when warmer temperatures boost bacterial growth. However, adding bacteria is not a magic bullet: The specialised bacteria will also be subject to the conditions that caused the excess sludge accumulation in the first place, such as low DO or short-circuiting.

Add aeration or reposition aerators: If there are surface aerators, they can be repositioned to disrupt the drifts of sludge that settle around them due to insufficient mixing. This will resuspend some of the settled solids so they can come into contact with oxygen and bacteria and decompose. Late spring and summer is the time to reposition aerators, because the natural increase in DO allows the lagoon to handle the added load.

In situ sludge reduction with Ares Aeration and Mixing
Ares Aerator® physically stirs up the sludge blanket and uses the treatment capacity of the lagoon to break down volatile solids. The settled solids are resuspended and the dissolved oxygen provided by the fine-bubble diffusers allows for efficient aerobic digestion.

The combined aeration and mixing capability of the Ares aerator accelerates the natural removal of sludge—preventing sludge build-up, optimising the capacity and service life of a lagoon, and reducing the need to dredge.